1. Talk to your marketing department to identify your average email open rates and use this metric to measure your progress.

Compare the results to the industry average to find out how your company’s emails are performing. If you’re targeting multiple segments, such as users with different job titles or in different verticals, look at open rates per segment as well. It could be that your email titles resonate more with one segment than another.

2. A/B test 5 email subject lines with a small segment of your mailing list and use the subject line with the most opens for the rest of the list.

Only test the subject line, without changing the body or content of your email. If you target users in different verticals or with different roles, do this exercise with one vertical at a time.

3. Conduct surveys and interviews with your customers to understand their voice using open-ended questions, and record their exact responses.

Ask how they feel about your brand or product and note common opinions, feelings, and phrases in the responses you receive. Make use of these in your email copy. Schedule 1-to-1 customer interviews to go more into detail and look for patterns and trends. At the end of this exercise, create a list with the common needs and wants, pain points and benefits, hesitations, likes and dislikes. Repeat this research at least once a year to address any changes in customer perceptions.

5. Write clear and concise subject lines that summarize the content and edit out complicated or trendy language.

In 2014, 2,211 MailChimp campaigns had dads and grads in the subject line. Those emails, sent around Father’s Day and graduation season, had an average open rate of 18%, lower than MailChimp’s benchmark. If an email subject line has become a trend, people know what to expect from the contents because they’ve received it from other companies too, and they often won’t bother opening the email. Focus on communicating the contents rather than selling them: a lot of consumers are fed up with sales pitches.

6. Compare length of subject line with campaign open rates to find out what your audience prefers. 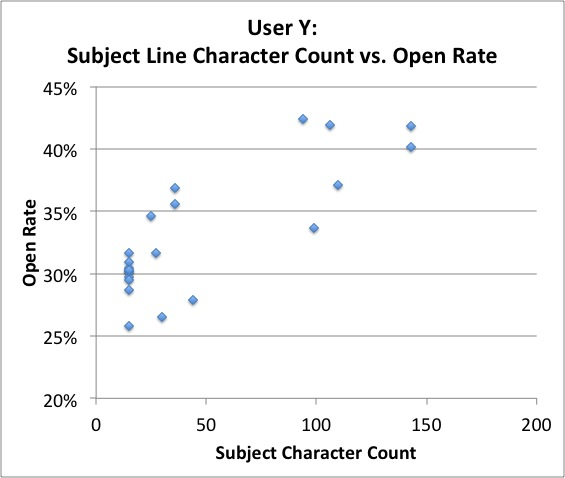 Look at how many of your customers are opening your emails on mobile devices, and check title character limits for popular email phone apps.

7. Use a subject line research tool to find variations of your subject lines that are known to get better responses in a wider audience.

Most email marketing platforms include this functionality. For example, this is Mailchimp’s: 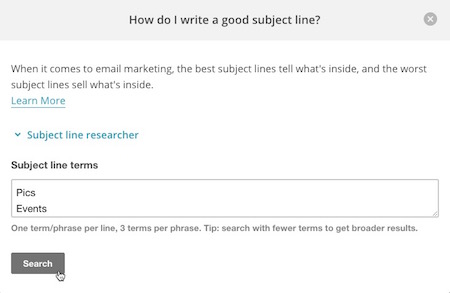 Test these variations against your own. Just because the wording tends to work better with a wide audience, doesn’t guarantee it will work better for your specific audience.

Mailchimp has found that open rates are 14.31% higher when the email campaign is segmented. Once you have set up your segments, you can test email subject lines within individual segments. For example, do people who requested a beginner’s guide respond better to Variation X or Variation Y when they get the confirmation email? Do people who work for agencies respond better to Variation A or Variation B in drip campaigns? Use these segments to drill down into your campaign results as well. Look at whether specific groups responded better to an offer or subject line.

9. Write preview text that builds on your subject line and offers extra information.

For example, your subject line might be, Flash sale! and the supporting preview text, Get an extra 25% off all sale items and FREE SHIPPING today!