How Jason Cohen does direct sales

Back in February 2010, Jason Cohen had an idea: A new WordPress hosting service, that would help with speed, scalability, and security.

He now faced the challenge that everyone with a startup idea once faces: How do I get my first customers?

Jason’s approach was simple and brilliant. He logged onto Linkedin, searched for WordPress consultants and sent them the following email: 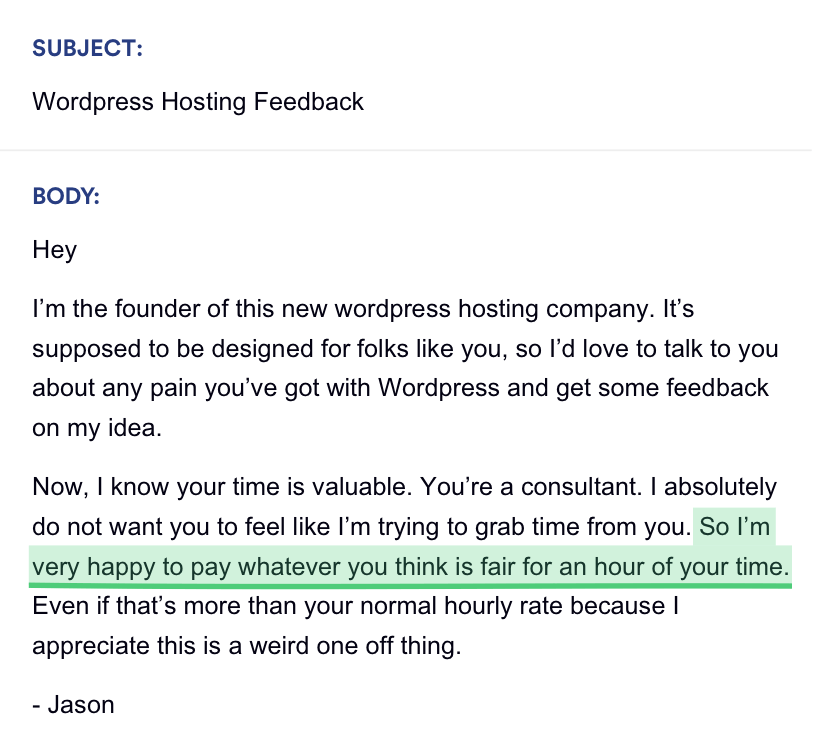 Jason sent 40 of these emails. 100% agreed to talk to him on the phone. Not one asked for any money. And after talking to him 30 verbally agreed to pay $50 / mo once the product was ready.

WHY DOES IT WORK SO WELL?

Well, Jason’s email is a masterclass.

He puts himself in the consultant’s shoes, shows respect for their time, and even calls out the elephant in the room – that the majority of these emails are just people trying to grab your time. Oh, and it’s an advice email.

But undoubtedly, the killer line is Jason “offering to pay whatever you think is fair for an hour of your time. Even if it’s more than your normal rate”. Why?

1. It signals that he’s not a time-waster.

2. It signals that he is fair to do business with.

3. And it’s flattering (that he’s willing to pay for your expertise).

These three reasons coalesce and the default response is:

Sure, let’s chat. You seem like a decent guy, so don’t worry about the money!

This example is taken from a talk Jason did at MicroConf 6 years ago, titled, “Designing the Ideal Bootstrapped Business”. I’d definitely recommend it.

If you liked the article sharing the thread on Twitter is really appreciated. Thank You!